Buy Now
Your bedtime and day time sanity saver. Perfect for the cot to bed transition. Helps keep toddlers & pets out of off limit rooms. Discreet & simple to install

"After two failed attempts of multiple nights to move our nearly three year old out of his cot into his bed due to his constant up & down & blatant refusing to stay in his room, we had all but given up when we braved a third attempt with Houdini Door in hand.

It went from being this horrid trying time with an overtired child to a breeze.

After explaining what we were doing & why, we put our son to bed.  While he came to the door to begin with & called out for various things, he couldn't get out & eventually jumped into bed & went to sleep.

After four nights we have a big boy who sleeps in his own bed. Day sleeps (as always) can be a little harder, but I have Houdini door & I know he's safe & secure & he can call for me if he needs me.

Stoked with the results & would recommend to all, just wish I had done earlier. Thanks a lot"  -
Maree Gordon, NZ - June 2016

We have 3 Houdini Doors in our house, on 2 kids rooms and our bedroom. These have been an absolute godsend!!!!!!. I ADORE this product.
They work amazingly to keep our ratbag 2 year old out of the bedrooms during the day (so he can't get into his siblings things and my makeup!) but keeps the air circulating as the doors aren't fully shut.
They also work great to keep mr2 IN his room when it is bedtime, otherwise I would never get him to sleep.
Seriously awesome product and I highly recommend it to other parents of toddlers!! They have kept me sane and I honestly don't know how I would have coped without them!
Definitely worth 5 stars!
Ally Bowden, NZ - July 2016

The Houdini door has allowed my husband and I to sleep in peace. Our 3 year old had a habit of getting into the kitchen at night and eating everything in sight, once we had the Houdini door on she no longer could get into the kitchen allowing us, and her, to sleep in peace. Easy to use, easy to install, this is one product I honestly could not live without! If you are wanting to child proof this is one product you really cant surpass!
Megan Pace. 28 March 2013.

I think the Houdini Door is fantastic! It is great at keeping my little one in her bedroom when it is time to go to sleep, and stay in the bedroom as told. I also have a wee baby and during the day we use it on that door to keep my 3 and nearly 2 year old out of the baby room yet still being able to get airflow through, and I can hear if she is crying and needs something. A wonderful product, just what we were after. Thank you
MarBev 4 April 2013

After many many months of misery (mine) and an over tired toddler who refused to stay in his room and kept waking the other kids, we had success with this on the first night! 3 nights on, and the threat of it is enough to make him go to sleep straight away! Last night he was asleep by 7pm, instead of the usual 10pm.It is such a great design, and so simple to use. I like how the door isn't shut, so he doesn't feel locked in, and I can also see what he is up to in there! Once again, thanks so much, I will definitely be recommending this to others!
Mellissa 9th April 2013 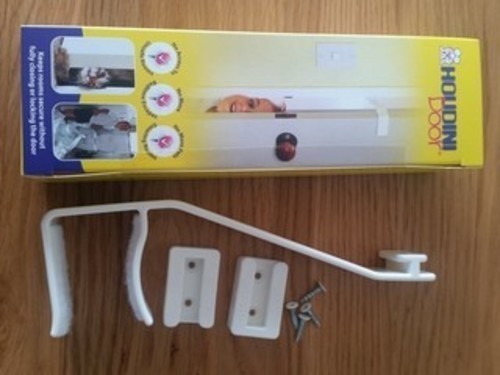